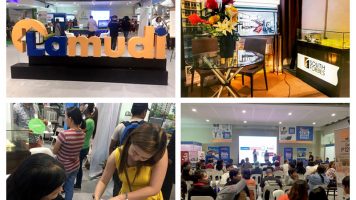 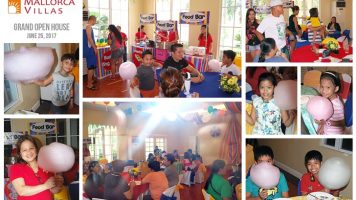 One Fun Day at Mallorca Villas

SILANG, CAVITE – The first pies were made by early Romans who may have learned about it through the Greeks. It was the Romans who published the first pie recipe and it was for a rye-crusted goat cheese and honey pie. Over the years, pie has evolved to become what it is today ‘the most traditional American dessert’. Pie has become a part of the American culture throughout the years, so much so that they now commonly use the term ‘as American as apple pie’.

Here in the Philippines though, apple pies are not nearly as popular as Filipino Egg Pies. It has already become a staple in street bakeries and even on commercial pastry shops.

Much like the origin of Pie, Mallorca Villas also offers an authentic Mediterranean experience being one of the most premier subdivisions in the country that offers the unique picturesque setting of the famous Mallorca Island in Spain right here in Silang, Cavite.

Last September 17, 2017, Mallorca Villas held its monthly Grand Open House at the Mallorca Clubhouse where our guests were treated to a mouthwatering pie party. Served with lunch, they indulged on a variety of pies and pastries including egg and buko pies, tarts, muffins, and cupcakes.

We would like to thank everyone who came and joined our September Grand Open House. See you on our next one!

For inquiries about Mallorca Villas and our other gated communities and subdivisions, you may reach us at ‎(+632) 635-7777 or visit our website www.mallorcavillasph.com

This website uses cookies to improve your experience while you navigate through the website. Out of these cookies, the cookies that are categorized as necessary are stored on your browser as they are essential for the working of basic functionalities of the website. We also use third-party cookies that help us analyze and understand how you use this website. These cookies will be stored in your browser only with your consent. You also have the option to opt-out of these cookies. But opting out of some of these cookies may have an effect on your browsing experience.
Necessary Always Enabled
Necessary cookies are absolutely essential for the website to function properly. This category only includes cookies that ensures basic functionalities and security features of the website. These cookies do not store any personal information.
Non-necessary
Any cookies that may not be particularly necessary for the website to function and is used specifically to collect user personal data via analytics, ads, other embedded contents are termed as non-necessary cookies. It is mandatory to procure user consent prior to running these cookies on your website.
SAVE & ACCEPT